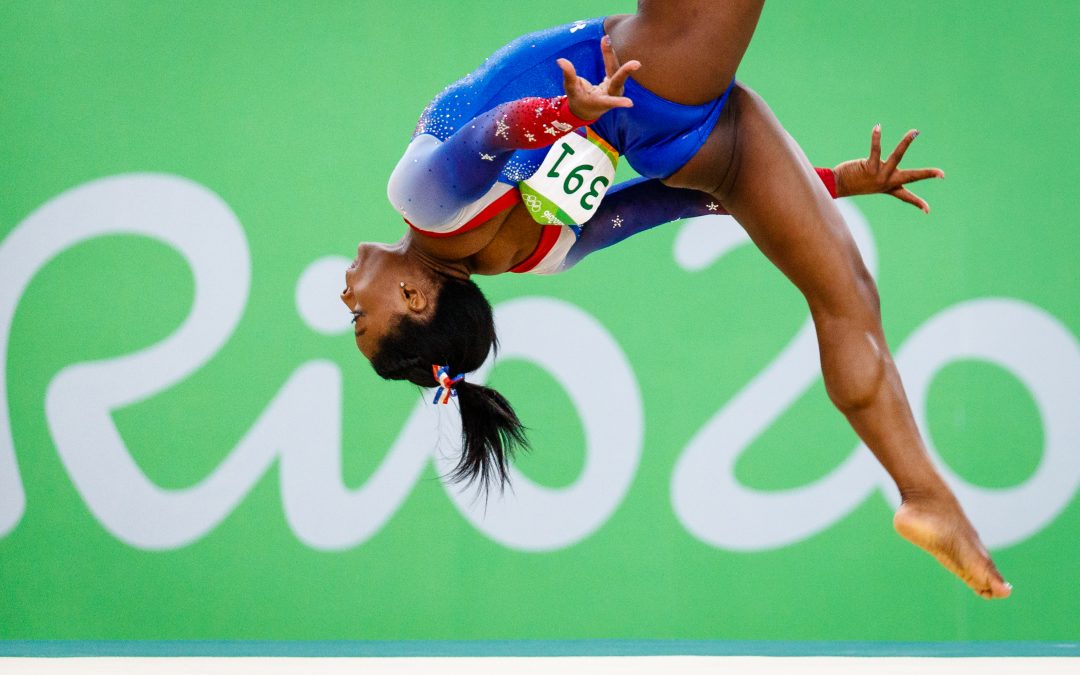 Looking back over the past week, there were three main stories, the weather, the coronavirus and the Tokyo Olympics. I examined the chart of the Olympics in my previous Friday Bite and, in view of the rising Jupiter, suggested the Games may turn out better than expected, if not to be absolutely fabulous. Well, thus far, the Games have not disappointed and, despite their original reservations, the Japanese people have come out in their hundreds of thousands to support and applaud the athletes.

The Tokyo Olympics was shrouded in controversy from the outset: scandals erupted in the weeks and days before it opened, and on Tuesday July 27th one of the most illustrious athletes withdrew from a gymnastics event, and the likelihood of her competing in the individual all-around final next week is slim.

After an uncharacteristically shaky start on the vault, Simone Biles, four-time Olympic gold-medalist, who some consider to be the greatest gymnast of all time, made a dramatic decision not to continue in the women’s team event. At first the reason given was “a medical issue”, but later in the day Simone herself gave a statement citing her mental health.

Simone had been struggling with a debilitating condition affecting her spatial awareness. “Twisties” is a mental disorder that can interfere with the body’s ability to move, and is therefore exceptionally dangerous for gymnasts. According to Aleah Finnegan, a gymnast on the USA national team, when it happens “you have absolutely no control over your body and what it does”. Extreme stress and exhaustion are contributory factors.

Simone’s honesty and determination to protect her mind and her body have drawn admiration from all corners of the globe, however there are those who have publicly called her step-back a “joke” and described her as a “quitter” and a “selfish sociopath”.

Before I take a look at her chart, we should bear in mind that Ms Biles is the only member of Team USA at the Games who was abused by the former gymnast doctor, Larry Nassar. (Nassar was sentenced to 175 years in prison after more than 140 girls and young women came forward with accusations of psychological and sexual abuse.) That tells you something about Simone’s character. 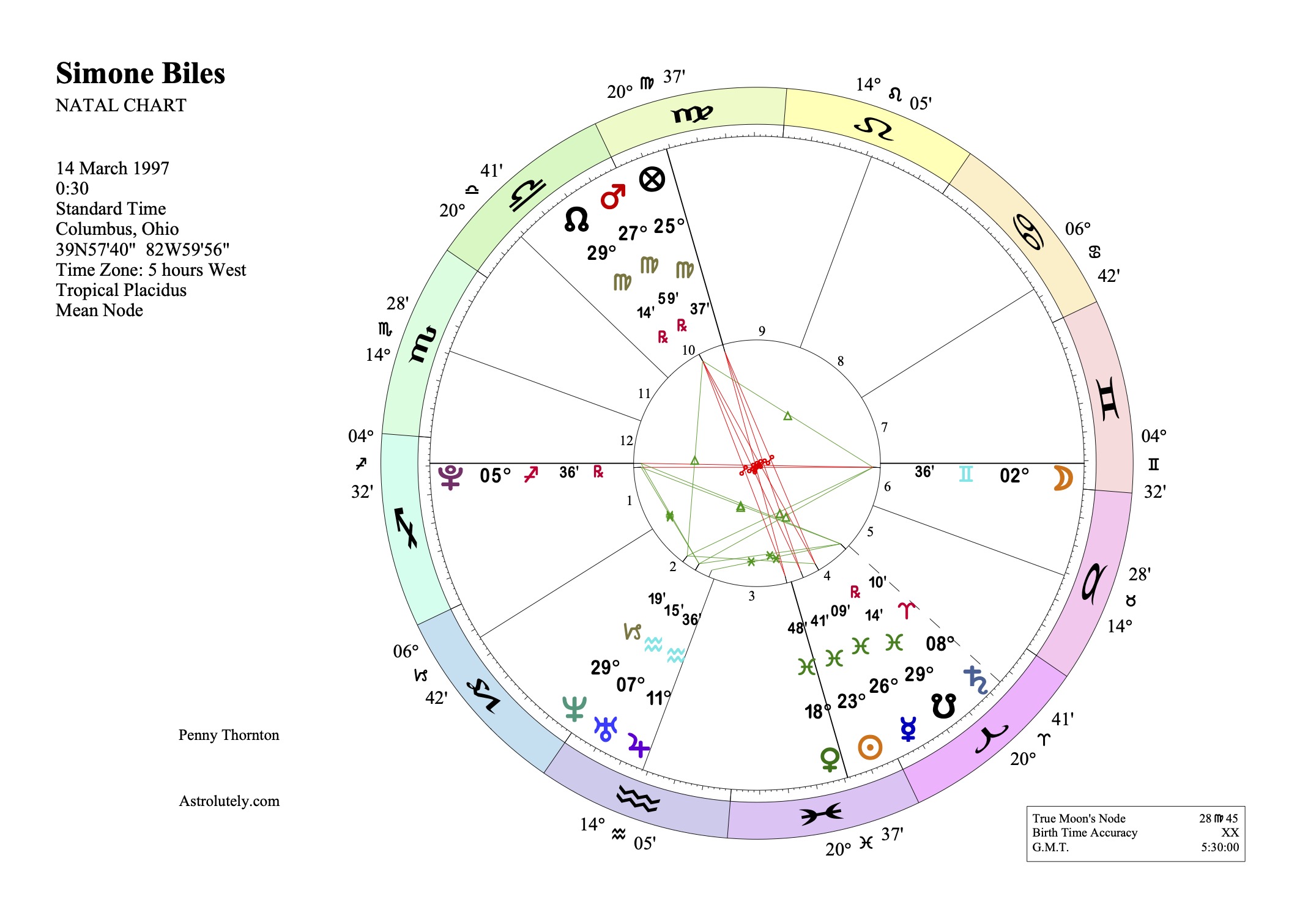 Simone was born shortly after midnight on March 14th 1997 in Columbus, Ohio. Pluto was rising to the Ascendant and the Moon in Gemini was setting. She is a Sun Pisces with Venus and Mercury also in Pisces. At the time of her birth a triple conjunction of Neptune-Uranus and Jupiter was in play.

You would expect such a gifted individual and such a powerful personality to have an impressive chart. As you look at the horoscope, clear and sharp aggregations stand out, the most dynamic being that of the Moon opposition Pluto on the Ascendant Descendant axis. Equally as powerful is the opposition from the elevated Mars in Virgo to her Pisces planets. Just the appearance of the horoscope suggests someone who is a force to be reckoned with.

A Moon-Pluto opposition speaks of a turbulent childhood and a complicated relationship with the mother. Simone was the third of four siblings. Her mother was unable to care for any of the children, leaving them to be fostered by various families. When Simone was three years old, her maternal grandfather and his second wife began looking after the family and in 2003 the couple adopted Simone and her sister Adria.

She was six years old when she found gymnastics, and by the age of eight, she was revealing a prodigious talent. At fourteen, she won her first competition – she was placed 3rd all-around in the 2011 American classic in Houston. Later that year, she was crowned national all-around champion thereby becoming the first African-American woman to win the title. Four years later, she led the US Olympic team to victory at the summer Games in Rio.

I’ve examined the charts of several sports stars in my newsletters and Friday Bites, and on many (if not most) occasions Mars has been situated in one of the zones identified as significant by the late Michel Gauquelin. Typically, Mars is to be found having just risen (in the twelfth house) just culminated (in the ninth house) or in the fifth house. Simone’s Mars may not fall in any of those segments but it is elevated and conjunct the Mid-heaven. Plus, it is the only planet above the horizon and opposed to the triple conjunction in Pisces.

Mars breeds courage and daring, physical skill and mental toughness, and these qualities are essential for an athlete, especially a world class athlete. But what gives Simone that extra edge is the rising Pluto which is opposed to the moon and sextile that powerful trio – Neptune, Uranus and Jupiter. Here we find the ability to rise above limitations and to triumph over adversity. Pluto, with its powers of transformation, is directly engaged with her persona and her physical self. When she hits a wall, reaches rock bottom, the experience revitalizes her.

So, Tokyo 2021 and what planets are influencing her chart? Your eyes should immediately be drawn to her Sun at 23 degrees of Pisces conjunct the IC at 21 degrees of Pisces for there lurks Neptune. You may remember that Joe Biden had Neptune on his IC during his bid for the presidency and we all know what happened: he was declared the winner on the night, the Electoral College ratified the win six weeks later, leaders from all corners of the world sent their congratulations, yet a good part of the country believed Donald Trump had won the race and was the rightful president.

That belief is still alive and well in many parts of the USA today. So, Simone, with Neptune on this all-sensitive point, was destined to have a very tough time of it at these Olympics. As it happened, her ambitions were thwarted by an utterly Neptunian condition – one that means you lose your sense of spatial awareness; your body is no longer under the control of the mind. And let’s not forget Covid, a virus with a Neptune signature, also played a key part in the disruption to all the athletes’ training programmes and their experience of the Olympics – team bubbles, empty stadiums and no family and friends to provide essential love and support.

It is unlikely with this strong Neptune influence that Simone will participate in next week’s individual gymnastic events. But this is by no means the end of her career. And although she may have lost out on Olympic medals this summer Games, she has won hearts and minds through her courage to speak out about the overriding importance of mental health.

“We have to protect our minds and our bodies and not just go out and do what the world wants us to do… We are not just athletes, we’re people at the end of the day and sometimes you just have to step back.”