Twenty-five years ago, on August 31 1997, Diana, Princess of Wales died. She was killed when the Mercedes she was travelling in crashed in Paris’s Alma Tunnel. The circumstances of her death remain controversial.

I had the privilege to work with Diana for six years. On our first meeting at Kensington Palace in the April of 1986, she was to divulge the miserable state of her marriage and air her hopes to be allowed to leave the royal family. This was not really a surprise since four years earlier I had written about the potential for divorce, and certainly the likelihood of marital stresses and strains, in my book, Synastry. Still, in the spring of 1986, there was no hint of any problems in the marriage beyond the Palace walls.

You come to know your clients very well over the course of six years, and Diana was very frank with her feelings and honest about her failings. She was a good listener and open to advice. That she was able to turn her suffering into helping those who suffered came out of those early sessions.

1992 was a pivotal year for the royal family – you may remember it was the Queen’s annus horribilis. It was the year of embarrassing leaked tapes and compromising photos culminating with the separation of Diana and Charles. The announcement of their separation came on December 9th on a total lunar eclipse that echoed one 56 years earlier when Edward VIII abdicated the throne.

1992 was also a pivotal year for me. Contracted to the then daily newspaper Today, Andrew Morton’s disclosure of my association with the princess in his book Diana, Her True Story turned me into an object of intense media interest. Basically, I was a sitting duck. A hostage to Fleet Street. My refusal to provide Today with an in-depth series of interviews about the princess poisoned my relationship with the paper, and the lengths to which News International went to get around this refusal led to the end of my association with Diana, the end of my job with Today and a lot of muttering and moaning in certain astrological circles.

In the years following the separation and the divorce Diana clearly struggled to define her new status, at one point retiring from public life (December 3, 1993 — three days after a total lunar eclipse squaring her natal Mars-Pluto conjunction) only to return less than a year later in the September of 1994. After a catastrophic love affair with art dealer Oliver Hoare and a sensational interview with Martin Bashir for BBC’s Panorama, it seemed Diana’s star was in freefall.

In 1996, writing for the Norwegian magazine Norsk Ukeblad, I voiced my concerns over the transit of Pluto which was to square her natal Mars-Pluto conjunction throughout 1997. Clearly, this transit posed a threat to Diana, whether in terms of physical harm or damage to her reputation, but when images began to be released of her and Dodi Fayed on holiday in the Mediterranean, plus her mysterious comment to the press that she was about to make an announcement that would surprise everyone, it seemed Pluto was instead triggering the potential for a magnificent, if turbulent, relationship – Mars ruling Diana’s seventh house. It was not the only indication of a passionate love affair: Jupiter was conjunct her Moon in Aquarius, opposing Uranus and squaring Venus (in the eighth house) while Saturn was hovering over her Descendant adding an aura of fate to the mix — of things coming together in time through the medium of a relationship.

But, as we all know, planets, aspects, transits and progressions have tiers of meaning, and just because one possibility appears to fulfil a particular brief doesn’t mean the others have been rendered null and void. Thus, on August 31st at twenty minutes past midnight, as the Sun and Mercury transited her Mars-Pluto conjunction, which was in turn squared by Pluto, Diana was fatally injured in a horrific car crash.

The footage of Diana with Dodi waiting at the back entrance of the Ritz Hotel in Paris are the last haunting images we have of her. We know the couple had chosen to leave the hotel by the back entrance in order to avoid the paparazzi gathered at the front, but precisely what happened thereafter is shrouded in speculation. After speeding along the expressway at over
seventy miles an hour, the car veered onto a slip road under the Pont de l’Alma and came to rest at the thirteenth pillar. Diana was declared dead three and a half hours later. 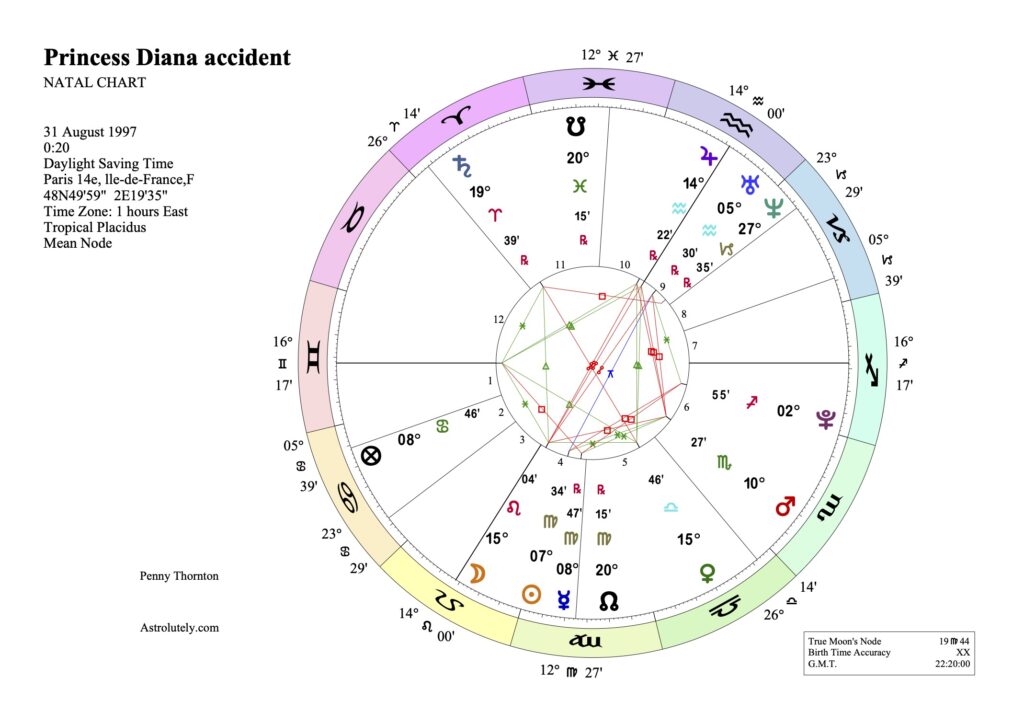 Hindsight is twenty-twenty, of course, and in the late August of 1997 astrologers could have been forgiven for interpreting the strong Jupiter influences as portents of unbridled joy. Even Mars conjoining her natal Neptune would chime with being divinely (or misguidedly) in love. And they would indeed have been correct, for Diana was clearly in thrall with Dodi and planning to make some important life changes. But the rest of the narrative is driven by the darker Pluto, Saturn and Neptune transits.

The Sun and the personal planets would have passed over Diana’s natal Mars-Pluto conjunction many times during her thirty-six years of life and probably given her a bit of a bad day every time. It was the solar eclipse combined with Pluto’s square to her Mars-Pluto conjunction that imbued this transit with a far greater significance in 1997. And, indeed, there were other highly relevant transits. That Neptune had reached her natal Saturn and the Nadir (and trined the cusp of her twelfth house) was one, and implied she had reached a significant life junction.

In retrospect, we might conclude that Saturn and Neptune presided over the end of the dream. 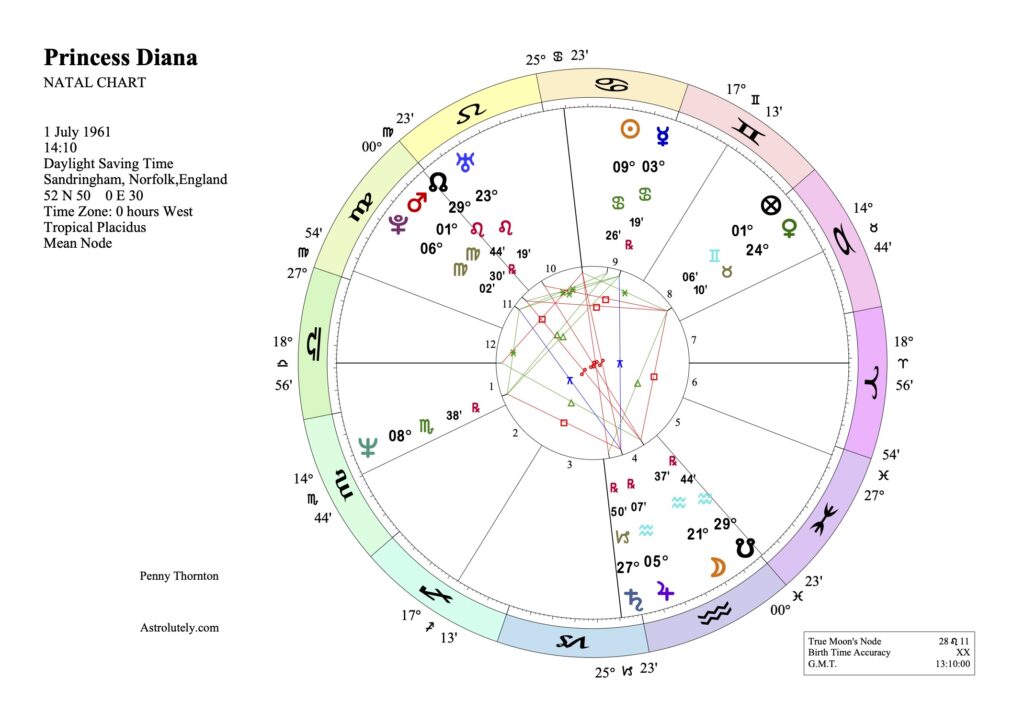 I think this is a good moment to bring up the issue of Diana’s time of birth. Diana herself told me she was born “just before the start of play at Wimbledon”, which reinforces her mother’s account of Diana coming into the world on “a glorious, sunny day, just as the local policeman scored a century” – that afternoon, the Sandringham cricket team was playing on the grounds outside the bedroom window. (For more details please go to this article.) There is some wiggle-room (maybe 15 minutes or so) on the actual time of birth, but the difference is marginal: at 14:00 the Ascendant would have been 17 Libra 12 and the Midheaven 23 Cancer 01 and at 14:25, 21 Libra 31 would have been rising and 28 Cancer 58 culminating. Nonetheless, that at the time of the accident the Moon-Jupiter/MC-IC axis was squaring her eighth house cusp is a significant pointer toward a 14:10 time of birth.

I think you may also find fascinating the Sabian symbols for the Ascendant and Midheaven degrees of the accident.
Sabian Symbol: 16 Gemini (Ascendant): Woman agitator makes an impassioned plea to a crowd.
Sabian Symbol: 14 Aquarius (Midheaven): On a steep climb, a tunnel offers a short-cut to a train.

For a little girl whose greatest claim to fame prior to her marriage to Prince Charles was a school prize for the best-kept hamster, Diana achieved what few have achieved – immortality. And it was her untimely death at thirty-six years of age that transported her from mere mortal into legend. She had already acquired a kind of quasi-sainthood by embracing AIDS sufferers and the like, and there were even reports of “miraculous recoveries” after she had visited the sick in hospital.

Not everyone bought into the Diana myth though. Some considered her a self-absorbed, vacuous clothes horse who meted out substantial damage on the monarchy.

Of all the complex patterns in Diana’s chart, Neptune’s position in the first house rendered her an enigma. And in many ways, she was an enigma even unto herself. Neptune’s trine to her Sun and Mercury in Cancer, however, are redolent of her desire to alleviate the suffering of others and identify with and draw attention to those who were rejected, placed in danger or ignored by society. And, of course, she in turn was victimised – some members of the royal family referring to her as Diana, the Martyr. And in the end, she was the victim of a drunk driver’s insane race through the streets of Paris.

Diana dedicated herself to serving others: she was a hands-on president and patron of over 100 charities, most of which were devoted to those in need. Yet her fallibilities and her painful honesty about them were the reasons people drew her to their hearts.

That’s why she was, ultimately, the People’s Princess.

Sadly, Diana never found what she was truly looking for. Love. A happy family life. Security. Stability. The one thing that brought her happiness, the one thing she was utterly confident about, aside from her boys, was the love she got from the public, which was why she returned to full working duties within months of making the decision to withdraw from them. Without a purpose, Diana was rudderless. And without a strong emotional underpinning, she was doomed to enter one disastrous love affair after another. A pattern we can trace to the proximity of Saturn to her Nadir and the Moon-Uranus-Venus T-square.

I found myself wondering what a sixty-one-year-old Diana would make of it all. I’m sure she would have underplayed the many painful episodes, dismissed her achievements and been entirely philosophical about the treatment she received from those she trusted and leant upon and those who betrayed her. I believe she would have regretted almost none of it, except, perhaps, that last moment decision to leave the Ritz and go to Dodi’s apartment.

As I put together this article about Diana, her life and death, and thought about the era upon which she carved her signature, I reached for my book on the princess which was written in 1994. My epigram turned out to be curiously prophetic.

Diana will be seen through the eyes of history as one of the great tragedies of our time. Like all prophets damned by their own country, her value as a change-bringer, a transformer, cannot be appreciated now. Her mantle is to bring the monarchy, kicking and screaming into the twentieth century.